One of the quintessential features of our New England landscape is the rambling stone wall.  Gray and lichen covered, these stone walls meander through the woods and line our roadways and fields.  They are so common place you may dismiss them as a natural feature,  but in reality New England stone walls carry a long history and represent the monumental human effort that went into the farming and building of this country. Contrary to what you might believe, stone walls were not common in the earlier years of New England settlement.  When Europeans first arrived in New England,  the land was densely forested and covered with a thick layer of topsoil and humus.  Thousands of years of forest growth and decay had deposited a thick layer of organic earth, burying the more stoney glacial soils deep below.   Although the first settlers had much to contend with, stoney fields were not one of them.

Along with an absence of stone there was an abundance of trees.  Wood was light, easy to work with, and plentiful.  This meant that wood was used predominantly for building purposes including the fences that surrounded properties to pen animals, protect crops, and mark property lines. 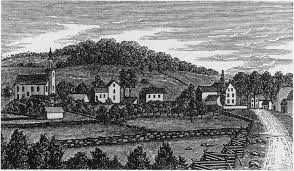 It wasn’t until about the time of the Revolutionary War that mass stone wall production began and hundreds of thousands of miles of stone wall were built in New England.

By this time private farming had become the predominate practice, and families had spread out throughout New England to work the land.  As they worked and farmed the land, the forests were clear cut for pasture, and the earth turned up and plowed.

At the time wood was a very valuable resource.  People used wood to build houses, heat homes, boil sap and for other industrial production.  The average family burned 35 cords of wood per year for heat and cooking alone, and by the mid 1800’s 75% of New England was clear cut.*  Without the forest and natural vegetation to hold and replenish the topsoil, the soil eroded and eventually exposed the more stoney glacial soils below.

Lastly, post Revolutionary War saw a new national optimism and a subsequent baby boom.  As families grew and turned their attention towards their homes and farms, there was now enough labor available to take on the task of moving the copious amount of stone that was now appearing in fields all over. 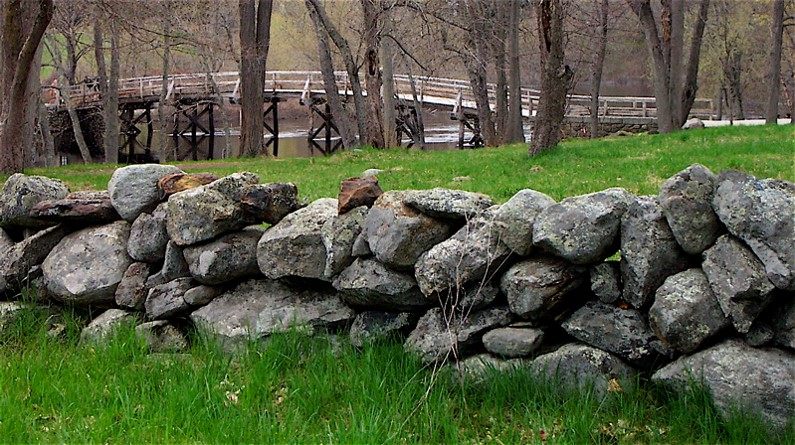 The stone walls of New England were not built all at once, but rather grew and evolved over the years.  Whenever necessity arose, or spare time permitted, farmers gathered stones and moved from the growing fields to the next easiest location.  Sometimes that was a pile, but more often it was the edge of the field.  The earlier stone walls were most commonly ‘dumped walls’.  These stone walls were more or less refuse piles, or simply the most convenient place to dump excess material.  Other refuse, like stumps and brush, would also have been dumped at the edges of the field.  Along with the stone this formed a barrier or delineation from the surrounding forest or neighboring fields.

Before tractors and machinery, stone was transported on carts or wooden sleds called a ‘stone boat’.  The stone boat was low to the ground so easy to roll larger stones onto, and draft animals were used to drag them.

Each spring more and more stone accumulated in the fields, and was transported to the edge,  and over the years the amount of stone grew.  Eventually as wealth and pride in one’s home/farm grew as well, time was spent stacking the stone into more organized and attractive stone walls.  “Stone by Stone” author Robert Thorson estimates that by 1871 there were close to 250,000 miles of stone walls, enough to stretch from the earth to the moon, or enough to circle the globe 10 times.  If an average worker can stack about 10′ of wall in day, these walls represent over 100 million man hours of labor.

As the farming industry faded in America, farms were abandoned, the forest retook the land, but the stone walls remained.  To this day you can scarcely walk a mile through forested land without stumbling across and an old lichen covered stone wall – the last remaining relic of the rolling farmlands that were once there.

Now days, we still build New England stone walls for a variety of reasons.  They create an attractive barrier to surround ones property which can mark property lines, contain pets and children, obstruct errant vehicles, and reduce road noise.  Weathered New England fieldstone is now a valuable material that we painstakingly reclaim from the meandering, overgrown walls in the woods, and re-use to build fieldstone walls and features of all sorts.

It is a comfort to know that the stones being organized and stacked in one’s yard now are the very same stones that were once pried up with iron bars, dragged across the fields on wooden sleds, and stacked and handled by generations of fellow countrymen before us.

At this home in Concord, MA the existing back yard has too much slope to enjoy seating, and there is no good access to the house. After determining grades and discussing options with the homeowners we settle on a plan for a raised bluestone patio, edged with granite to hold the grades, and bluestone stepping stone walkway to meet the door.

To prep for the bluestone patio installation we excavate the area and use the excavated dirt to raise the grade below the patio in order to further reduce the difference in grades. We also use this opportunity to tie in all downspouts to an underground drainage system which will transport all roof runoff to the far end of the yard.

The granite curbing is set flush with the surface of the patio, and there will be an 8″ step off down to the yard, and down to the walkway.

One the granite is in we finish filling the patio base, and then lay the bluestone. This is thermal bluestone in a random pattern with polymer sand joints. The result is a sharp, classic looking patio that creates much more useable space and access to the house. Great for entertaining and giving the residents somewhere to sit while watching children in the yard.

At this Organic Farm in MA we build an outdoor kitchen area. It will consist of bluestone counters, natural stone veneer, an Argentine style grill, and a pizza oven. Along with regular cooking and entertaining the owner will use this outdoor kitchen for cooking demonstrations and videos as well.

To build the kitchen we install a concrete base, and then block up the form. The counters are designed to stand on columns so that there is space below for wood storage. It also has a small set of shelves and a firebrick cutout for the Argentine grill.

Once the blockwork is done we install the natural stone veneer. This is a 1″ thick sawn stone in the stacked stone style. We use a mix of sizes, run the stones mostly level, and break the joints to give it an authentic drystack stone wall look.

At the same time we install the firebrick to line the open grill. Firebrick is a special heat resistant type of brick that is used to inside fireplaces, ovens, etc. It can withstand a very high heat without cracking and crumbling like regular brick/concrete/stone. As an extra detail we lay the firebrick in a 45 degree herringbone pattern.

Once the veneer and firebrick is on get ready to install the counters. We use 2″ thick thermal bluestone and the kitchen is designed to use several standard size pieces. We also add some steel to the spans b/c there will be a stone pizza oven on top.

The grill is an Argentine Style grill or sometimes called a Gaucho Grill. It is an open grill with large adjustable rack. The pizza oven is a pre-made oven from Forno Bravo that we set on top of the re-enforced counter. Once the grill and oven are in the wood fired outdoor kitchen is ready to use. 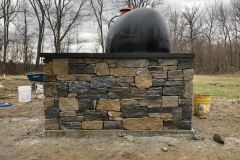 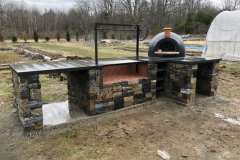 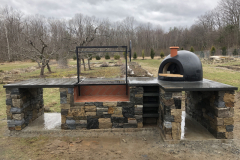 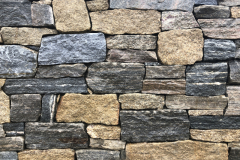 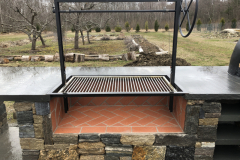 Some shots from a unique project in #tynsboroughma

Some drystack retaining walls and granite steps he

New entry stairs and walkways at this home in #sud

Wrapping up a fieldstone boundary wall at this pro

A granite and stone veneer stairway with bluestone